Why would you lick stamps?
During homeroom on Monday I rushed through the required reading of the student handbook because I wasn't sure how long it would take. So then we had about half and hour to kill. So I got out my book of lateral thinking puzzles.

The puzzle scenario was something like A kidnapper sent a ransome note but didn't sign it. He was caught. How? The solution is that he left his DNA on the stamp.

One student asked, "Why would you lick a stamp?" So then I felt old... or no... more like they were really young. I explained how stamps used to have to be licked; they were not stickers. Then this led to a funny moment where a girl said that she always licked her stamps. You don't have to?
- posted by Alicia @ 8:16 AM |

Great First Day
Really. Pretty great. Except I woke up at 5:13. Which is dangerously close to the 4 o'clock hour which is NIGHTIME. But then I drove to work when the sun was coming up and I thought, "God. Awesome."

I was smiling walking into the building thinking about the minds that I would get to meet and mold and form. I looked over the balcony, down at the kids, thinking that those were the students I would get to know over the next nine months. Months from now I will look down and know who they were, but for a few moments they were just a mass of khakis and polos, tucked in. They looked sharp. They were potential.

Eventually I got my game face on. And answered questions and gave out information. Overall a successful day.
- posted by Alicia @ 8:31 PM | 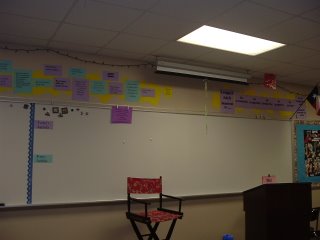 Veronica Mars
Just have to promote the show with this video shown at Comic Con. The video is awesome, but the quality is not. The way that Veronica's "S's" sound, it reminds me of the way Holly Hunter talks, especially at the end of The Firm, where all of her S's sound like "sh". ........ hehe.... Marsh Inveshtigashions.....
- posted by Alicia @ 8:20 PM | 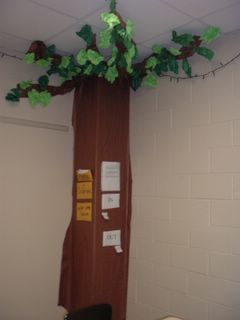 A paper tree in the corner of my room.

First Day!
First day (no students) today. We got the going-over-policies- stuff over with in 5 hours. That's where getting there at 7:30 didn't seem so bad. We were done by lunch time. I also got to get a lot of curriculum planned for the first few weeks. It was really an awesome day. So far I have met 2 students and after seeing the rosters, I was excited to see that I don't have more than 27 students per class (yet).
- posted by Alicia @ 8:07 PM |